On this day in 1975, the Pirates' Rennie Stennett went 7 for 7 in a nine inning game against the Chicago Cubs.  He had four singles and three doubles with two RBI's. On this night in 2012, the Detroit Tigers, Pittsburgh Pirates, and Cincinnati Reds all stayed in the same hotel in downtown Chicago.  The Tigers were in town for a make-up game with the White Sox.  The Pirates were staying over night after finishing up a four game set with the Cubs.  The Reds just arrived and started a series with the Cubs the following day.
Posted by Michael at 4:00 PM No comments:

Needless to say, the Mick is an all-time great, but what would his statistics be if he had two healthy legs?
Posted by Michael at 5:00 PM No comments:

Two years ago today, I flew home from Chicago on another delayed flight and although, I was very tired, it was an awesome trip!!  It was my first time to visit Wrigley Field, US Cellular Field, and Chicago so it was great to cross those things off my list.

I picked this up to read in the airport or any downtime we had and I'm certainly glad that I did!

We got into Chicago at about 8:00 am and walked around downtown to see some sights.

The Cultural District and Michigan Avenue was really nice and had a ton of cool places to stop in and check out.


This would be an awesome place to take in a show or concert!

This was pretty cool; the view from the other side was great because you could see the reflection of all of the buildings behind it.


We decided not to go all the way to the top due to cost, but it was still amazing how tall of a building it is.  At first, you don't think it's that much bigger than any other building until you are standing at it's base.

I absolutely loved Wrigley Field and Wrigleyville.  The atmosphere around the ballpark was amazing!  It reminded me of being in Cooperstown, but there was a MLB game taking place.  It felt like baseball.

I was amazed at how close you really were to the field.  Every seat felt like you were on top of the diamond.

With where we were sitting, we had a nice breeze coming though, which was much need on the 90+ degree day.  As you can see, the field was almost framed for us...a pretty cool view!


Of course, I had to get a picture of the infamous Bartman Seat!

US Cellular Field was pretty nice, but it could not compare to Wrigley Field.  If we would have visited US Cellular first, I may have liked it more.  One thing I hated was that you couldn't go from one level to the next?!? I've never heard of that before.  The worker that informed us of that acted like every single stadium was like that.


We also had tickets to Sunday's Cubs/Rockies game, but Mother Nature had something else in mind.  The game started later on in the day, but we couldn't stay due to needing to catch the flight home.  It would have been great to catch a third game on this trip, but I still can't complain.

Due to the storms, our flight was delayed, which makes me three for three on delayed home flying planes that summer.  Even with missing the Sunday Cubs' game and the delayed plane, it was a fantastic trip!  I will definitely have to make another trip back to Chicago in the future.

Posted by Michael at 5:00 PM No comments:

Email ThisBlogThis!Share to TwitterShare to FacebookShare to Pinterest
Labels: Trips

There is some debate on when his 3,000th hit officially took place, but this is the most common date recognized.
Posted by Michael at 6:00 PM No comments:

A Career Switch is in the Works

Hello all! Hope everyone has been doing well!  I realize that I haven't posted for a while and I apologize for that, but I've been so swamped with everything that cards and baseball in general has been put on the back burner.  The only baseball I have watched in the past two months or so has been the three Pirates' games I went to.  The school is year is over.  Both of the volleyball seasons have come to an end as well.  With both of those being in the books, I will have a lot more free time...but only for the next 2-3 weeks.

Instead of having all summer off and simply working camps like I was expecting.  I have decided to switch careers.  I enjoy teaching, coaching, and working with student athletes, but there are simply no jobs right now.  I have an opportunity to pursue a new career and I'm rolling the dice and going for it.  The earning potential for this new job is sky high, but that is not what's most important to me.  I will still have an opportunity to help people and families as well as having more control over my schedule.

Needless to say, I am WAY behind on posts from my two COMC orders (I still never finished my February posts), a ton of eBay orders, and a few Twitter trades.  I hope to get a ton of posts done in the next two weeks as well as some golf and relaxation.
Posted by Michael at 6:00 PM No comments:

I bought a jersey relic and an amazingly, sweet auto of Evan Longoria, might as well have my third purchase being a combination!!

Don't get me wrong, I am pumped to have this card in my collection, but I think the pink Longo auto may be my favorite of the three pickups.  Which one is yours?

Posted by Michael at 5:00 PM No comments: 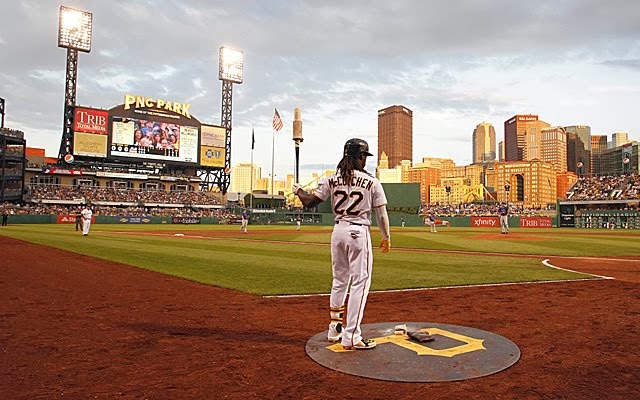 https://docs.google.com/spreadsheet/ccc?key=0AvsBk6NRgR3-dGVxOXE5V1VKcU1DeWotWnVUbGU3QlE&usp=sharing
This will be an ever expanding and occasionally shrinking list of cards that I have seen and now want to acquire.